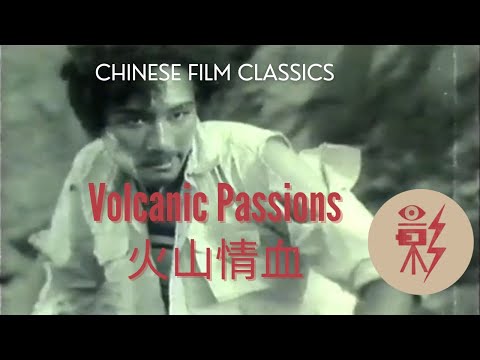 In a tropical land at the foot of a volcano, “a deep grudge rankles, and ignites!”

This subtitled version of the film uses an open-access digital copy reproduced from VHS by the Columbia University Library: https://clio.columbia.edu/catalog/14925790?counter=2

Song Ke lives with his father and younger siblings in the idyllic Willow Blossom Village. Family members pray to Heaven for peace and happiness, while Song prays for a “handsome husband” for his sister, Jade. Instead, she is kidnapped by Fifth Master Cao, the nephew of a warlord. When Song and his father protest, Cao’s men frame them for theft and have them thrown in jail. Cao extorts Jade for their release, but she kills herself rather than become his fourth concubine, and Father Song and his younger son end up dead. Song Ke curses Heaven for the tragedy and flees from persecution by Cao’s thugs, leaving China for a distant tropical land of “women, red wine, strapping bodies, and naked hearts.” For three years he lives in a town of Chinese laborers at the foot of a volcano. Nursing his grudge, Song Ke gains a reputation in this rowdy boom town as “the man who never smiles” …until he meets Willow Blossom, a beautiful dancer recently hired by Coconut Grove Tavern. Initially put off by her lifestyle and her name, which reminds him of home, Song eventually falls in love with her. Then Cao arrives, recognizes Song, and has Song imprisoned again. Willow Blossom and her friends rescue Song, who confronts his sworn enemy just as the volcano erupts. As residents flee, the pair fight their way up to the top of the volcano, where Song pushes Cao in. The eruption ends, and, having avenged his family, Song Ke returns to embrace the injured Willow Blossom, who vows to live and watch him “rid humanity of all monsters.”