Wild Rose (1932) was a breakout role for Wang Renmei (Juanita Wang), which made her a national star and consolidated her reputation as the “wildcat” (yemao) of the Chinese silver screen.

Wang plays Xiao Feng, a country lass who lives in a village outside Shanghai. A vivacious young woman, she tends to her widower father along with the livestock, and leads an army of neighborhood kids. One day, Jiang Bo (played by Raymond King, aka Jin Yan), an artist from a wealthy family, drives to the countryside to paint the bucolic scenery and comes across Xiao Feng tussling with a harasser in a ditch. He is instantly smitten by the uninhibited young woman, and comes to appreciate her patriotism. Dad (played by Zhang Zhizhi), a boozy fishmonger, is in debt, and his creditor asks for Xiao Feng as payment. Dad explodes with rage, inadvertently killing the man and setting his own shack on fire, with the creditor in it. Dad flees, and Xiao Feng, out with Jiang and the kids, returns to find what appears to be the charred corpse of her father. Jiang takes the orphaned Xiao Feng back with him to live in his father’s mansion in Shanghai. But when Xiao Feng, uncomfortable in high society, inadvertently embarrasses Jiang’s father in front of a dignitary, Jiang’s father orders her to leave. Jiang replies: “If she goes, I go too!” and dad expels both. They end up renting a terrace room in a humble part of town, which, Jiang remarks, is just like the studio he once rented in Paris. Though the couple and their pals are happy for a while, Jiang fails to sell his paintings and, in winter, falls dangerously ill. With no money for treatment and facing eviction, Xiao Feng picks up a dropped wallet on the street; when the police come, Jiang takes the rap and is jailed. The desperate Xiao Feng seeks out Jiang’s father and promises never to see Jiang again, so long as his father saves him. Dad agrees, and Xiao Feng visits Jiang in jail, then disappears. Jiang pays the rent on their old studio and visits her former village but does not see her. Then war breaks out in China, and the pair is reunited when Jiang spots Xiao Feng in a parade seeking recruits for the Volunteer Army. Yet again, he leaves his pampered life behind—this time not just for a woman, but also for the nation. The film closes with them and their friends marching on “the path of glory.”

Wang Renmei and Jin Yan married in 1934 and divorced in 1944. Wang also appears in the box office hit musical Song of the Fishermen (1934); Jiang appears in several Lianhua hits, such as Love and Duty (1931), The Peach Girl (1931), and The Great Road (1934), all available with English subtitles on the website.

This translation is based on the best available open-access copy of the film, which includes stunted framing, projection errors around minutes 38, 44, and 74, and marginal image quality in places.

Wang Renmei (2013), by Richard J. Meyer
Wang Renmei was on a fast track to become one of China’s leading film stars in the 1930s. Her early films were received with magnificent praise by audiences and critics alike, though she later lamented that she became famous too early and never had a chance to properly study acting. 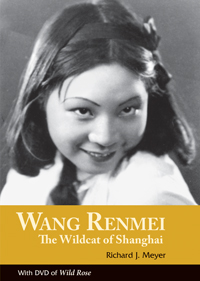 Song of the Fishermen 漁光曲 (1934)
Sister and brother struggle to survive as fishermen in northern China, in this musical melodrama. A box office smash. 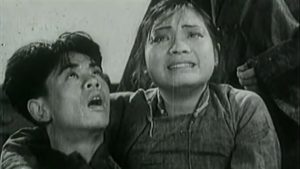